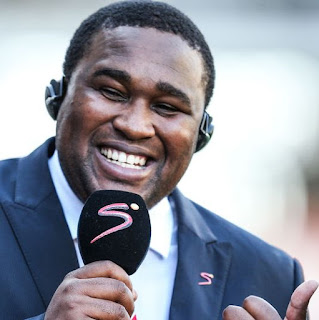 This morning, former South African rugby player and rugby commentator Kaunda Ntunja (38) was announced as dead by sister Tando Ntunja.
“It is with deep sadness I confirm the passing of our beloved brother Kaunda Ntunja, earlier today in East London, Eastern Cape,” she wrote.
Without going into detail about the cause of death, Tando asked that the Ntunja family be given time to grieve.
“As you can imagine, we still trying to make sense of this tragic news and we ask for your love, care, and discretion as we prepare to lay my big brother to rest.”
Kaunda was the first black African SA Schools captain, a Currie Cup winner, and a groundbreaking SuperSport commentator in 2008.
SA Rugby said in a statement they were “deeply saddened at the loss of one of our most-beloved rugby sons, Kaunda Ntunja”.
Kaunda was born in East London where he attended Dale College.
He played for Border in the Craven Week in 2000 and was appointed captain of the SA Schools in the same year. He also captained the SA U19 side in 2001.
He played junior rugby for the Sharks and represented the Southern Kings and Lions and Cheetahs, before retiring in 2008.

The best commentary I’ve ever heard, I still get goosebumps ❤️. May the ineffable legend Kaunda Ntunja Rest In Peace 🙌🏾pic.twitter.com/gru0JXyAlD

SuperSport sadly mourns the passing away of leading rugby commentator & presenter Kaunda Ntunja. Our deepest condolences to his family and friends.