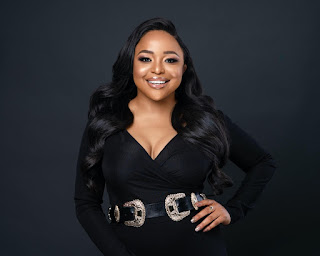 Throughout her 17-year career in the local broadcasting industry, media personality Karabo Ntshweng has proven to be a formidable force. This vibrant and witty presenter kicked off her career on SABC 1’s popular youth television programme YOTV, which groomed her into the formidable host she is today. She recently made her weekday radio debut as the host of Early Mornings With Karabo on 5FM every morning between 4am and 6am. Now, Karabo opens up and shares some tidbits about herself which many may not know about her.

1) Karabo’s Dream Dinner Date Would Include Some Influential People Karabo admits that if she had the opportunity to host three people, dead or alive, for dinner, her mix would certainly be an interesting one. Her first guest would be author Toni Morrison.
“My love for books was largely influenced by her writing so I would love to have some time with her and unpack her stories,” Karabo says.
Karabo would also want to host Brenda Fassie and Elon Musk at the dinner. “Brenda would add that extra no-filter sass to the conversation and I’d pick Elon’s brain on his story and tips he’s learned. I am ready to be rich.”
2) Like Many Of Us, Karabo Has Had Some Embarrassing Moments “
Live TV is a beast. So many things can go wrong and you have to go on because you only have one shot in your delivery,” Karabo says.
“I’ve had my braids literally start falling off while I was doing a live TV show before. I’ve also had a co-presenter faint live on air and I had to pick up the pieces – and did a really bad job at it.”
3) If Karabo Wasn’t In Media, She Would Have Been An Author. While Karabo loves sharing stories on radio and television, she has always been a fan of the written word and often thought of becoming an author when she was growing up.
“I was one of those kids who changed what they wanted to be literally every day. But an author is one of them,” Karabo says.
“Instead of playing outside with other children I’d be writing my own children’s books. Sometimes I wish I had carried on with that because I probably would have been a big-time author now.”
4) Karabo Is Proud Of The Woman She Is Today When asked what is her biggest achievement to date is, Karabo explains that she is proud of the woman she has become.
“I have invested in myself heavily since I was young. Growing up as a ‘child star’ so many things can go wrong. You see this in Hollywood so often. I am grateful I have surrounded myself with people who ground me.”
5) Karabo’s Dream Gig Involves A Whole Lot Of Travel While Karabo has dominated the local television and radio space, the star admits that her dream gig would be a travel show with a twist.
“Imagine being paid to travel and experience different cultures for a living while documenting it! I studied anthropology so that would be there perfect marriage of my studies and my passion,” Karabo says.
“I am absolutely fascinated by human behaviour and how our cultures and background influence how we navigate the world so presenting a show like this would be a dream come true.”
6) Nelson Mandela Has Left A Massive Impression On Karabo The father of our nation, Nelson Mandela, has left a massive impression on so many South Africans – including Karabo. In fact, meeting and interviewing him has been a moment that has continued to inspire her as the years go by.
“I was so nonchalant about it when it happened, but as I grew older, I realised what a big deal that was,” Karabo explains. “It’s a career highlight for sure.”
7) These Three Cities Have Left A Mark On Karabo As mentioned, the travel bug has certainly bitten Karabo. When asked about her favourite travel destination, Karabo admits that there are three cities which have left a massive impression on her.
“I love Thailand for its island vibes and the friendly people, New York City because I’m a sucker for city living and that place is the ultimate city destination and Cape Town because I never ever get tired of how happy my heart is when I am there.”
8) Cooking Is Not Karabo’s Forte While Karabo has an array of incredible skills, cooking, unfortunately, isn’t one of them.
“I really hate cooking,” Karabo says. However, when she does host people, she has a secret weapon that never lets her down – the braai. “A braai always does the trick,” Karabo explains.
“My guests always leave happy after a braai at my place.”
9) Her Dream Closet Has Loads Of Sneakers When it comes to mapping out her dream closet, Karabo admits that she sees a sneaker library with an array of classic and limited edition footwear.
“My dream closet includes lots and lots of Nike sneakers and Adidas gear because that’s literally all I wear. In fact, I see myself owning Rainbow’s closet in the series Black-ish. They style her incredibly well!”
10) The Reason Karabo Fell In Love With Radio While she started her journey on TV, radio has crept its way into Karabo’s heart – and the passion she has for the medium shines brightly through her content.
“My favourite thing about radio is realising how similar we all are and how many experiences we actually share,” Karabo explains.
“We’re all different and extremely diverse (which is something I love about South Africa so much) but we really are the same in many ways. That’s the best thing about radio, you really get to know your audience.”
She adds that radio allows her to really be one with her audience.
“I think that while both TV and radio are the same in the sense that you have to be yourself, in TV you have to pay attention to what you are wearing and what you look like whereas with radio it’s a lot more intimate and requires so much more depth,” Karabo adds. “I think that’s what I love about it most. I can get to studio wearing my PJs without my eyebrows fleeking and purely just be Karabo.”
2020-07-20
Previous Post: MiclnGrace Studios responds to allegations of tax evasion and unfair labour laws
Next Post: Beloved rugby commentator Kaunda Ntunja passes on at age 38