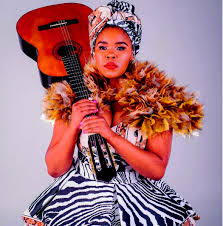 The BBC has revealed that singer/songwriter Bulelwa Mkutukana (33) from better known by her stage name Zahara is among the trailblazing women on this year’s 100 Women List, celebrating inspirational and influential women across the globe – from high profile names to unsung heroes.

In a year of unprecedented turbulence, this year’s theme is ‘How Women Led Change in 2020’ and celebrates some of the scientists, public health experts, and healthcare workers who have helped us weather the storm of the global pandemic, as well as women from other industries who have all been leaders of change in their own way – from politicians, lawyers and architects to actors, writers, athletes, singers and those who have sought to improve the lives of others in their community.

Bulelwa came from humble beginnings in Phumlani village in the Eastern Cape, South Africa, and found her love of singing in the school choir. She started her singing career busking on the streets, but in 2011 her debut album went double-platinum in less than three weeks.

I am hugely honored to be included in this amazing list of inspiring and influential woman. Thank you @bbc @bbcnews for selecting me as one of the @bbc100women 2020 #BBC100Women2020 pic.twitter.com/rXX5MSBWcC

The singer-songwriter has been showered with awards and is enjoying a successful career in the music industry – but she has also used her platform to speak out about violence against women in South Africa, something she revealed has happened to her.

– Make yourself heard – How to find your voice and beat the ‘gender say gap’
Do you feel you need to speak up and find a voice that is true to you? Hear the experiences of women overcoming hostility on the work Zoom, learning to command a room, and cleverly putting down micro-aggressions. And not just at work – in their personal lives and the online world too.

– Money, money, money – How to make your cash work for you
How can women build up their financial resilience?  Our financial experts will show ways to plan and make ends meet, set yourself saving goals, and make the most of what you earn. Ensure your financial independence with some neat tricks.

– Turn up the volume, girl! – How to create (and listen to) tunes that empower you
Africa’s music queen and three-time Grammy Award-winner Angélique Kidjo, Grammy-winning solo rapper Ana Tijoux, and fierce drummer and ‘electrofeminist’ Madame Gandhi will curate a list of “must-listen” anthems to play out loud and dance to. They’ll get the party started with Radio 1Xtra’s Jamz Supernova and share their advice on how to make it in a male-dominated industry.


Learn something new… fast!
A series of six-minute masterclasses from some of the women on this year’s list.

1. Get your mental health fix in 5 mins…for free – a lesson in better self-care
By Dr Etheldreda Nakimuli-Mpungu, psychiatrist and developer of a group therapy programme to tackle depression symptoms.

2. Five top tips to live a greener life
By landscape architect Kotchakorn Voraakhom, who works on projects that promote urban resilience to climate change, including Asia´s largest urban rooftop garden and a new green space in an unused elevated rail line that opened in Bangkok during the Covid-19 pandemic.

3. Want to help build a more inclusive world? Stop being a friend and become an ally
By Shani Dhanda, founder and leader of Diversability + Asian Disability Network, and award-winning disability specialist listed as one of the UK’s most influential disabled people.

4.  How to stay social and beat ‘lockdown loneliness’
By Karen Dolva, CEO of the start-up No Isolation, who has made it her mission to help others, from young children to seniors, to cope with feelings of loneliness.

The announcement of the list kicks off BBC’s 100 Women 2020 –  Shining a spotlight on women’s experiences around the world with a week of special interviews, inspirational masterclasses, documentaries, features and digital content across the BBC’s UK and international TV and radio services and online. More info HERE

2020-11-27
Previous Post: All about Sho Madjozi’s new mixtape, What A Life
Next Post: Handcrafted luxury brought to you by Sitota Collection x Pearl Thusi