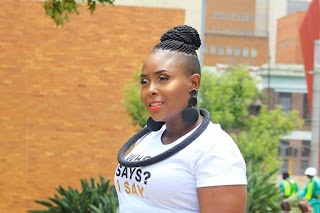 Following her amazing work with Worship House, Shibu Molomo has chosen to pursue a solo career.
The Limpopo born singer has started recording her album titled Ke Sethakga.
This decision came after successfully performing gospel covers for social media.
Ke Sethakga will include traditional hymns and new compositions.
Shibu grew up in Mookgopong formerly known as Naboomspruit in Limpopo.
“A place like Mookgophong does not offer much to a child as musically gifted,” she says. However, this did not stop her from pursuing music from a young age.
“The province of Limpopo musically is known as the place where Zion gospel music triumphs due to two dominant churches found in the province. I was exposed to this type of music from an early age, from artists such as Oleseng Shuping, Winnie Mashaba and Masole A Tumelo,” she adds.
As an adult and singer with the Mookgopong Community Gospel Choir, Shibu entered and won a singing competition spearheaded by the Limpopo Arts and Culture department called I Can Sing.
“It was this competition that led to me being mentored by renowned Fuba School Of Drama And Visual Arts former Tutor Miss Precious Makgabe Manaka,” she adds.
In 2014, the Limpopo powerhouse gospel group Worship House recruited Shibu Molomo. She went on to record with the group on their eponymous Worship House – Project 12 recorded over the long weekend in May 2015. She was given a chance to showcase her vocal abilities on this project through a song called Mollo Wa Jeso.
2020-06-16
Previous Post: Layla McKenzie Writes A Scathing Eulogy For Thembeka Shezi
Next Post: Channel O celebrates Youth Day