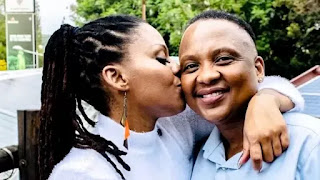 Picture: LetoyaMakhene/Instagram
by Cece Smith
Former Generations actress and singer Letoya Makhene has found love in the arms of Women’s Rights activist Lebo Kheswa.
The two met in February and have not laid their eyes off each other since.
Letoya recently announced on her social media that she and Lebo are cooped up for the lockdown together.
The couple recently partnered up into helping those in need with food parcels during the lockdown period. Lebo and Letoya joined forces with Buntu Foods who offered a helping hand and have contributed towards our food parcels drive.
Letoya also released her single Ngihawukele.
By Buzz Life NewsApril 30, 2020EntertainmentLeave a Comment on CELEB: Letoya Makhene loved up!