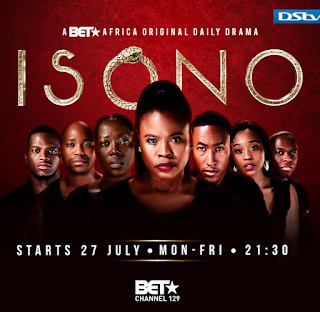 ISONO is based on the story of a dysfunctional family and a heroic son who searches within himself for the strength to stand up against a powerful and evil matriarch who will stop at nothing to serve her own needs.

BET Africa has recruited legendary star power actors, Nthati Moshesh and Rami Chuene to bring gravitas to the new show. Nthati Moshesh will play the protagonist and the antihero Mary, a ruthless woman of faith. Rami Chuene joins the cast as Jumima aka Juju, an eccentric gossipmonger who often buys into occasional conspiracy theories and gets the wrong end of the stick by making odd connections and pronouncements. Also joining the cast are celebrated actor and entertainer – Anga ‘Naakmusiq’  Makubalo, risingstar – Tokollo ‘TK’ Sebothoma and 2019 winner of the Naledi Theatre Award – Didintle Khunou.

ISONO will be the first African daily drama to air to an international market and is produced by Clive Morris Productions (CMP), who have successfully produced award winning content and have a depth of industry understanding with accolades both locally and internationally.

Senior Vice President and General Manager, Editorial for ViacomCBS Networks Africa Monde Twala says  “Africans are amongst the most passionate and dedicated viewers of daily dramas. We are proud to be able to contribute to this rich culture of authentic local storytelling. ISONO features an award winning cast who deliver an edgy story line that is set to resonate with local viewers.”

“I cannot express what a milestone this is for the South African entertainment industry. To take such an admired art form, celebrated by millions of South Africans and put it on a global platform is an accomplishment we can all be proud of. I am humbled by the opportunity and look forward to sharing this powerful story with audiences across the world,” says Nthati Moshesh, lead cast member and one of South Africa’s most revered actresses.”

Clive Morris, founder and CEO of CMP added, “We’ve been knocking on this co-producing door for some time now – and it’s wonderful to see it swing wide open with BET.  It is a maturing of our industry. It’s a privilege that BET Africa partnered with us to bring their very first telenovela to life.“

Developing young black talent is one of my passions and this project has enabled that in a big way. I watch with pride as new voices are breaking free and taking their gifts of storytelling to the world.

Our COO, Khaylihle Dom Gumede and MD, Lala Tuku, are working tirelessly behind the scenes to raise the bar with ISONO, and we believe that with the dynamic, talented cast and crew, this show will be a trend setter.”

The ISONO daily drama brings to audiences the suspense and intrigue of the dual nature of human personalities; the things we reveal about ourselves and the things that make people wonder: “what are you hiding?”.

Be sure to catch the first episode of this suspenseful new addition to screen. ISONO will air on BET Africa (DStv Channel 129) daily from 27 July at 21:30 CAT.

2020-06-11
Previous Post: AKA becomes one of the first to go number 1, 2 and 3 on 7 charts
Next Post: Pamela Nomvete to star ‘In The Long Run Series’ alongside Idris Elba