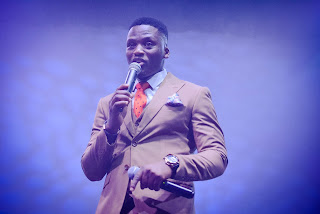 His album Blessings Untold is currently topping the charts.

Gospel singer Tshepo Theko, 30, also known by his stage name Tshepo Price says his journey into music has not been a walk in the park, but he is finding his feet.

He knew he had a voice in primary school when he joined the choir.

Music has always been dear to his heart, but after Grade 12, he was unable to pursue Music studies due to finances and he opted to study Tourism and Management.

“Although I am a graduate, I still went back to my first love, music.”

Tshepo says music is not just about entertainment, but about touching souls.

‘’I want to heal people with my music, “he says.

“I want them when they hear my voice to have the courage to do better in their lives and put God first in everything that they do” he adds.

Tshepo recently parted ways with former recording label Reechards Records to be his own boss.

His wish is to build a gospel empire which the future generation will benefit from in years to come.

“I think I have learned what I needed to push on myself and enrich myself instead of others. There is no recording label which comes to you portraying their bad side, they all approach us with good intentions and change on us along the way. But anyway, it’s a lesson some of us needed to learn”, Tshepo says.

By Buzz Life NewsMay 12, 2020UncategorizedLeave a Comment on Tshepo Price standing tall on his own