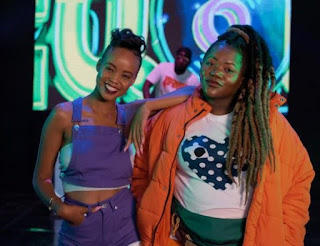 MTV base (DStv channel 322) launches into the New Year with its continued commitment of bringing audiences local content productions that resonate strongly with viewers, by announcing the sequel of the riveting television show Gqom Nation today. The sequel features Banomoyacrooner Busiswaas co-host of the epic music and dance show, working alongside Ntando Duma – who has been with the series since it launched in 2017. Filmed in KwaZulu-Natalwhere the genre initially exploded, the latest season of Gqom Nation will premiere on MTVbase(DStv channel 322) on Friday, 25 January 2019at 18:00 CAT.

Each week the hosts, Busiswaand Ntando Dumawill be joined by some of the entertainment industry’s big named DJs on the decks such as Tira, Vumar, Maphorisa, C’ndo, Dbn Nyts, Distruction Boyz, LeSoul, Cruel Boyz, Happy Galand Funky Qla.  They will merge with one dance crew who will perform their best moves on the dance floor while some of South Africa’s entertainers who are adulated in the gqom culture such as Moonchild Sanelly, Dladla Mshunqisi, Tipcee, Madanon, Goldmax, Rhea Blak, Bhizer, Artchild, Biggie, Parasand Zodwa Wabantuwill also make a guest appearance.

Commented Busiswa: “Gqom Nationis one of the first shows that is specifically broadcasting Gqom culture to the audiences since its growth, and this genre is certainly taking over the world. I am ecstatic to be a part of this evolution.”

As in the first installment, the locally created Gqom Nation TV show is directed by Batandwa Alperstein, “Gqom Nation powerfully extends beyond music and dance to celebrate African Excellence.When you see the skill and passion of the dancers and hear the experimental sounds the producers are creating, African pride is evoked. In season one, we presented gqom in its raw and gritty essence. With Season 2, gqom’s world-class genre of creative expression and art permeates every aspect immersing audiences into the unique rhythms, culture, and soul that is born from our inspiring country,” he concludes.

Be sure to watch this captivating music and dance show of Gqom Nation’s second season when it premieres on Friday, 25 January 2019at 18:00 CATonly on MTV base(DStv channel 322).