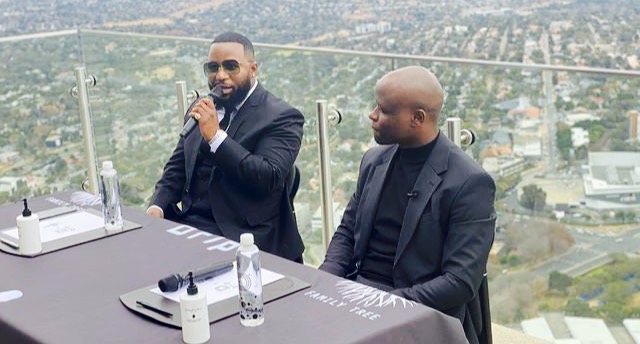 Today, Drip Footwear announces the welding of its long-term relationship with fellow creative entrepreneur Refiloe ‘ Cassper Nyovest’ Phoolo in the launch of #TheLegacyDeal.

Recognizing the influence, success and the emerging international brand power that began about ten years ago with Family Tree/Cassper Nyovest, the unprecedented new partnership makes history as the most significant partnership ever created between a non-athlete personality and an athleisure brand. It will redefine the future, uniting Drips’ innovative expertise and capabilities with the visionary imagination of Nyovest.

Proving to the public that anything is possible, Drip Footwear has made it its mission to set country-wide domination. This alliance presents an ingenious shift in personality and corporate brand collaborations.

Cassper says: “This is what dreams are made of. It’s moments like these that redefine history. A shift of power. A milestone for me and South African Culture. This also sends a strong message out so say, as much as you can do great things on your own, 2 great black minds are always better than one. Another one for black excellence.”

“The synergy of two businessmen coming from similar backgrounds sparked this alliance. This is a celebration of two brands working to reach international markets and inspiring the young ones in Ivory Park where I grew up, and Mahikeng where Cassper is from. With consistency and faith, they too can reach these heights, no matter which dusty streets you’re from,” added Lekau Sehoana, Founder of Drip Footwear SA.

Today’s announcement is the latest in a series of landmark achievements made by the Top charting Hip-Hop musician and entrepreneur. In 2017, the presentation of Family Tree merchandise rewrote the template of modern street-wear culture, uniting style, music, celebrity and social media to create a vibrant spectacle of creative expression. The evident success stories from both brands provide a perfect blend of a brighter future in the black owned business sphere.

Drip Footwear continues to be a brand of firsts, being the first eco-friendly sneaker brand in South Africa, producing products from recycled materials, to now embarking on its first artist-to-brand partnership with an internationally recognised South African artist. #TheLegacyDeal stems from the notion of exemplifying and encouraging generational wealth for future leaders. Every aspiring entrepreneur has to start somewhere in hopes of building legitimate businesses, and this deal seeks to ignite a level of motivation to South African youth.

The official finalisation of the agreement is hosted in Sandton on June 8th 2021 on the highest floor of the tallest building in Africa, The Leonardo Hotel. Now, as long-term business entities, Cassper Nyovest and Drip Footwear remain excited to explore and share their journey with supporters, as this is one of the highest valued deals in the history of deals being made between an artist and a FMCG brand.

In 2003, Growing up in an informal settlement of Ivory Park, Lekau Sehoana didn’t have any Shoes to wear. He saw an old Torn Sneaker, he redesigned it using Denims and Polyurethane. The Sneaker became a hit and people started ordering it. Making an entry into the Shoe Making business and exchanging Pain with Profit , for the next 5 Years of his High School Years.

16 years later in 2019, the commercial Brand was born and he named it DRIP. The concept behind the Name and branding of this Footwear business comes from the modern day usage of words. Changing the meaning of words to a whole different meaning, to make the word cool or what’s being changed to even cooler. Drip means drops of Liquid although In urban street culture it means looking nice, having high fashion senses, Ukotini, style or being highly fashionable.
We blend very well with the new climate of business and social Media, Influence, Modern Street Culture and Trends. Thus our name is trendy and we have adapted to the current wave of Lifestyle and Fashion unlike 16 Years ago, even though our DNA and Principles still remain that of 2003.

There are three most important key elements about this Brand Called DRIP.