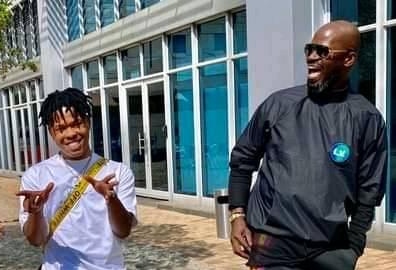 AMPD Studios by Old Mutual announces Zulu Man With Some Power, a seven-episode weekly podcast produced by Nasty C and hosted by Moozlie. These episodes will unpack invaluable lessons on how to build a sustainable career in the entertainment industry.

The Durban-born star has innovatively looked to share the raw and unfiltered details about his life, origins, and interests on the Zulu Man With Some Power podcast hosted by TV personality Moozlie. The production has been sponsored by AMPD Studios, powered by Old Mutual.

Officially launching on the 25th of February, the seven-week podcast series showcases the rapper speaking about the business of music, signing with an international label, his chart-topping music and experiences touring multiple countries across Africa. He also speaks candidly about growing an audience in Japan as well as planting his feet in North America. The 24-year old had a beautiful set built at the Universal Music studios where the interviews were recorded.

“I am so thankful to all the people that contributed to the making of this podcast series. I had great conversations with a lot of people that I admire. I got to learn more about them as individuals and even more so, about myself in the process. The podcast series will give fans a glimpse into what my life is about and impart some of my own knowledge and experiences around my particular music-making process and how I handle my business. It’s definitely something to look forward to” commented Nasty C.

“As a corporate sponsor, through our AMPD studios, we, at Old Mutual, are delighted to support Nasty C and his seven-part podcast series. This partnership is a great example of working together for the greater good and reaching out to share the wisdom that can help many more aspiring artists amplify their musical and financial futures” stated Thobile Tshabalala, Head of Brand, Old Mutual.

“When we revised our Old Mutual sponsorship strategy in 2019 (to find ways to better connect with our customers and tap into their passions and interests), we had already begun a journey into the 4th Revolution and digital world. Covid 19 has just emphasised that we were on the right path and demonstrated how critical it is to move away from traditional sponsorships where branding and presence were key and move to a world that empowers, excites and reaches many more people. The digital world is now critical for us to make that positive difference and enable positive futures even more. Our support of Nasty C and his seven-part podcast series is just a prime example of making a changing world work for the benefit and the empowerment of us all.” She concluded.

The Zulu Man With Some Power podcast will be available from 18:00 onThursday 25th of February 2021 on all streaming platforms.