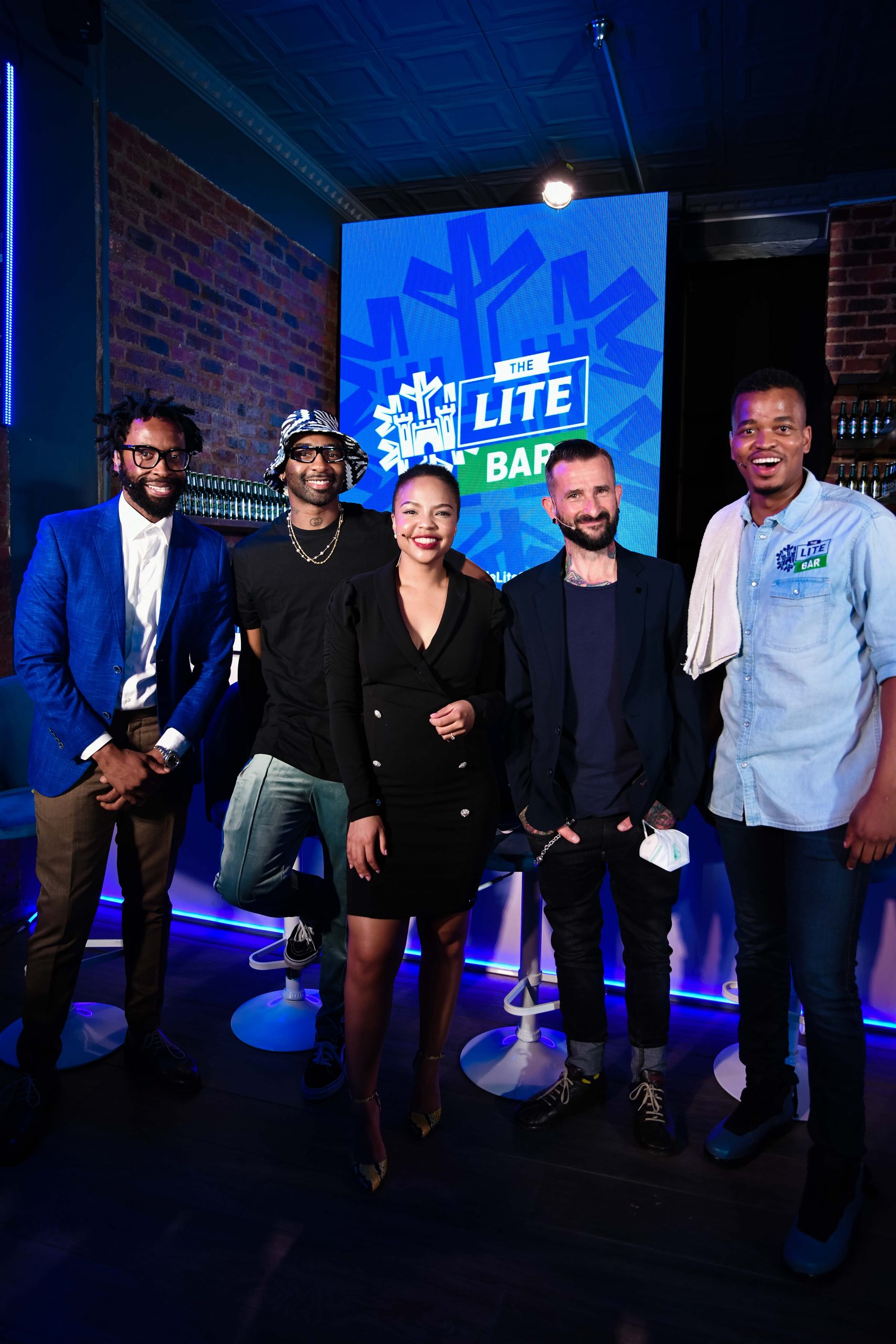 Africa’s biggest premium beer brand, Castle Lite, finally open the doors to its world-first innovation called The Lite Bar, a mindful matters bar that offers men the space to have serious and much-needed conversations about mental health amongst each other in a lite environment.

The Lite Bar officially opened its doors last night for the first night of a two-day pop-up experience at Parks Corner in Rosebank and was also streamed live on Castle Lite Facebook’s page to ensure that as many men around the country have access to the bar as possible.

In the bar was host and bartender, Mpho Popps who led discussions featuring DJ Sbu, Ricky Rick, Dr Nokukhanya Khanyile and John Vlismas who were all in the house to talk about what it means to live a better and more balanced lifestyle and to help everyone share the heaviness but keep the lite.

The panellists discussed a wide range of issues that face South African men such as fatherhood, breaking the stigma around mental health, toxic masculinity, and the pressures of social media.

Dr Khanyile shared her expert opinion on the subject, reminding everyone that the challenges which face men in 2020 are complex issues with many layers resulting from biological, social, and psychological shortcomings. She reminded everyone that even as grownups, our inner child relates to the world based on our personalities, our backgrounds and our mental strength which all impact they way in which we handle things.

“Men have always been encouraged to be competitive and this creates a burn-out cycle amongst them. What’s more, men always expected to show their dominance over others. And so the reason men have the highest rates of suicide is because they can’t talk to other men since they are always competing with each other,” she said.

Veteran broadcaster and musician, DJ Sbu offered his perspective as a man navigating social issues and pressures in the public eye. He reminded everyone that a lot of people envy those who are in the spotlight but this puts pressure on them to look and act a certain way at all times which creates a subconscious and constant need to be perfect. And according to him, this pressure is what has caused some of his peers to suffer from mental challenges such as depression. He also linked these struggles to what the youth face on a global scale with social media putting them in a constant spotlight.

“And sometimes people aren’t even as focused on you as you think they are; but because of the pressure you feel, you act the way you think you are supposed to. The society we are growing up in is a competitive society and now when you are famous or popular on social media, you have pressure to come across a certain way which isn’t always necessary,” he said.

Meanwhile both Ricky Rick and John Vlismas weighed in on breaking the stigma of mental health for men. Ricky spoke about how he has faced an internal struggle because he’s never really had a positive male figure in his life; someone he can confide in and share what he experiences as a man and a father.

In response to Ricky, John Vlismas reminded men that it is okay to seek help by speaking to someone and going to therapy. “People think there needs to be something wrong with you to go to therapy. But for me, it’s like gym for your brain; therapy is an excellent form of release and you don’t even have to be feeling bad to do it. Take time to work on yourself and be aware of yourself and what you need,” he said.

The conversations and fun will continue tonight as day two of the Lite Bar features Pearl Thusi, Somizi, The Kiffness, and Proverb with the host of the evening being funny man, Donovan Goliath. DJ PH took to the decks to close off the Lite Bar.