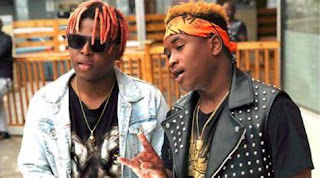 For a long time, people have been speculating the split between Distruction Boyz members Thobani “Que” Mgobhozi and Zipho “Goldmax” Mthembu.

The duo recently graced us with never-seen-before, behind the scenes content piece that shares the dream and aspiration that is Distruction Records.

Que and Goldmax took time to put fans at ease and explain that there is no change, Distruction Records is their joint record label.

Solo projects are something they’ve planned over the years, they’ve had so much success as a duo and believe that having their solo projects allows them to get their creative juices flowing for more music in future from Distruction Boyz.

They insist, they have always wanted to have the biggest house label in South Africa, which opens doors to all genres such as tech and Afro-house.

Most of the talent signed under Distruction Records are from Durban and are artists who’ve had their successes in their respective genres, most recently BlaQRythm dropped his new single “Imvula” which has become an Afro-house favourite.

The Label allows them to appreciate different types of music with sounds other than Gqom Music, the Distruction Records label has allowed them to empower themselves and empower the talented artists under the label such as Drega and K-dot who will also be releasing their projects in the near future.

Goldmax also just dropped his hit single “Iphupho Lami” which has been firing upon the Metro FM charts and has become a fan favourite. The Duo views this experience as an exciting new Journey for Distruction Boyz and a stepping stone to them coming back with new music that is larger than life, with conversations being cemented with the likes of Diplo and Mr. Easy, watch this space!