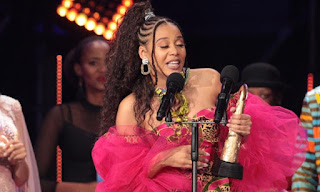 The Recording Industry of South Africa (RiSA) has announced that the annual South African Music Awards (SAMA) will stage its 26th edition next month.

The SAMA has become the most prestigious and sought-after music accolade in the country and in the time of Covid-19 and the current social distancing norms, the party has moved from the Sun City Superbowl to be streamed on My Muze by Vodacom and broadcast on Mzansi Magic, DStv channel 161.
Under the theme ForThaKultcha, it will be presented over five nights between 3 and 7 August 2020 at 21.30 in adrenaline filled yet bite-size 30-minute episodes, except for the last night which will be a forty-five-minute grand finale.
Music lovers are in for an exceptional virtual experience that will capture the fervour, excitement and magic that is associated with an event of the SAMA calibre.
The red carpet moves to the Twitter streets and everybody is invited for their fair share of the spotlight.
A powerful duo of hosts will preside over the show while a star-studded assembly of guest presenters and panelists will keep the vibe going, not to mention a glittering line up of performers and collaborations to provide top notch entertainment.
The nominees in the Record of the Year and Music Video of the Year categories that are open to be voted for by the public will be announced on Thursday, 9 July 2020 on SAMA26 social media platforms and My Muze by Vodacom. SAMA26 is in partnership with Mzansi Magic and My Muze by Vodacom.
RiSA CEO Nhlanhla Sibisi comments: “We look forward to the SAMA26 virtual experience. Our teams are hard at work to deliver a show that we will all be proud of given the current state the world is in. I invite you all to tune in, plug in and do it for the culture.”
“The South African Music Awards have always been a platform where talented Mzansi artists have been recognised for their excellence. As a channel that has a track record of showcasing local talent across several platforms, we are very proud to be partnering up with SAMA26 to give our viewers front row seats to this virtual showpiece,” says Nomsa Philiso, the director of Local Entertainment Channels at M-Net.
Rehanna Hassim, Executive Head for Digital & Lifestyle at Vodacom comments: “We are proud to partner with the SAMAs this year again. Our role, especially during this period, is to ensure that people #StayConnected to everything they love, and, through MyMuze.com, are delighted to be the platform that enables people to experience the magic of the SAMA while staying safe at home. This is made possible by a powerful network with a passion for connecting people.”
The annual South African Music Awards (SAMA) are organised by the Recording Industry of South Africa (RiSA). Mzansi Magic, DStv channel 161 is the official broadcast partner of SAMA26 and My Muze by Vodacom is a sponsor.
Social media handles
Instagram: @thesamas_
Twitter: @TheSAMAs
YouTube: samusicawards
Facebook: South African Music Awards
Hashtag: #SAMA26
Website: www.samusicawards.co.za
Picture: SAMA25
2020-07-06
Previous Post: Somizi’s mom passes on his late dad’s birthday
Next Post: Moshe Ndiki breaks silence after abuse allegations