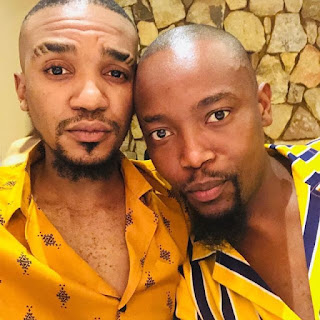 This past weekend’s Sunday Sun newspaper; TV personality Moshe Ndiki and Phelo Bala’s relationship was put on blast when reports on an alleged abuse occupied the front page of the tabloid. The article described how verbal and physical abuse led to two court cases being opened from either side.
This evening, Moshe has released a statement addressing the allegations.
“The article made a number of allegations regarding alleged incidents between my Phelo and I and the current existence of protection order applications. These are matters of a private nature and I have been advised because there are court proceedings, I cannot reveal anything. However at this present time I would like to state that I have no way abused Phelo and I have proof to this effect,” he wrote.

“Anyone who has dealt with Domestic violence knows how difficult it is to speak about their experiences and the shame attached to being a victim with questions I myself have faces and comments like why did it take you so long to say something? You’re so loud everywhere else about everything why not this? You look and sound emotionally strong, how did it happen to you?”

Moshe went in to say that he is ccomforted in the knowledge that his friends and family know of his [Phelo] aggressive nature when he has had drinks.

“The angle taken in the article and the allegations made in there are an attempt to humiliate me and be an extension of the abuse I’ve endured, even emotionally so. I’m deeply saddened there has been a violation of our private mediation on this matter. It is for these reasons that I chose not to expose our private differences, at this stage, I kindly ask that  I be afforded the time and space to del with these trying times with those close to me, whilst processing whats going on.”

He followed by requesting that he be given the necessary privacy.
“I would like to assure you that this is not my nature and I would rather like to speak about this once I am ready emotionally, if at all I choose to speak on it. Thank you.”