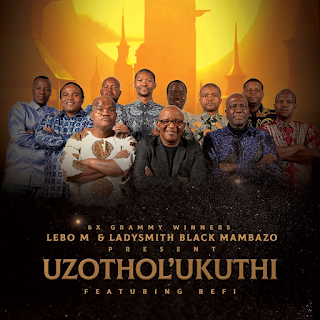 Seasoned producer and composer Lebo M is excited to kick off celebrations for Ukhozi FM’s 60th Birthday with the release of the first song from upcoming compilation album.

The creative giant has leapt at collaborating with a variety of artists across the country to celebrate 60 years of broadcast for leading radio station Ukhozi FM.

The compilation album will feature a musical blend of genres that are prominent on the urban station, and that helped forge it as the no1 in Africa; and no2 radio station in the world.

True to Ukhozi FM’s DNA, the compilation album to mark this turn of another decade milestone; will host a variety of Maskandi, Isicathamiya, Traditional gospel, Afro-soul singers and more – musically fused under the direction of the Grammy award winning Lebo M.

Lebo M collaborates with legendary 5 time Grammy Award winning Ladysmith Black Mambazo, Nkosinathi Shabalala eldest son of the late Joseph Shabalala founder of Ladysmith Black Mambazo and songstress Refi, to reinforce hope, faith, resilience and strength to all South Africans the first song off the compilation, titled Uzothol’ukuthi.  As the country continues to navigate through dark times – Uzothol’ukuthi reminds the people of the nation of their ability to overcome; pushing a powerful message of perseverance.

Speaking on the song, Lebo M had this to say – “It was such a thrill producing Uzothol’ukuthi, in just 3 days. The song was recorded in South Africa; mixed and edited in different parts of the world from Lesotho to Paris and Los Angeles – really driving the importance of the message in the song, unity.” He went on to say, “It’s an absolute privilege and honor to have collaborated with my brothers from Ladysmith Black Mambazo on this first single off the celebratory album; and the super talented Refi who has lends her beautiful vocals to the melody.”

Lebo M beautifully crafts the sense of global unity that transcends all humanity on the production and composition of Uzothol’ukuthi, which is exclusively available for listen on Ukhozi FM. A new song will be released on Ukhozi FM every Friday for a 60 day duration in commemoration of the station’s 60 years of broadcasting. To purchase Uzothol’ukuthi SMS “Lebo Mambazo” to 48701, each song costs R10 only.