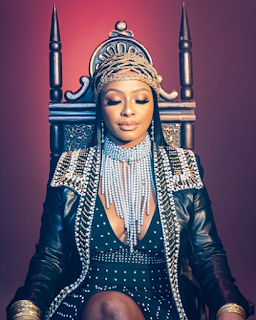 WHEN IT’S TIME TO FLEX…SHE OWN’S HER THRONE!

The queen of securing big bag, Boity is back with a banging new single Own Your Throne following the success of her two singles Wuz Dat and Ba Kae as well as a number of notable features with Yanga and more hip hop artists. The Hip Hop Gogo is kicking butt and taking names. Her growth is evident from her first offering to this. A Reality TV star, fashion icon and a Def Jam Africa prolific bar-spitter, Boity is coming for everything!

Buhlebendalo went back to her Xhosa roots and reclaimed her throne in a massive way with her fresh release of emotive, rhythmic and spirt-filled album Chosi. Chosi is a response to a storyteller before and after they tell a story. Another musical Gogo, Buhlebendalo has defined herself and sound as something for every conscious being to consume. Her vocals are flawless, she is not the girl from The Soil, there are levels to this creative life, the girl has transcended to her much higher self in image, sound, vibes, yonk’ into! Sjava is one of the artists featured on this beautifully put-togeher project! Stream it, buy it, play it loud, it’s the best cure for a hangover too!

THE TRAIN IS FINALLY HERE! INDIA ARIE, SHO MADJOZI, BLACK MOTION & ARE ON BOARD…DON’T MISS OUT!

There’s an African train with lots of melanin hunks! It started off in Kenya and took off to Johannesburg, Los Angeles and now it’s your turn to jump on it. Sauti Sol has released a brand new album Midnight Train which features their beautiful singles Insecure, Brighter Days and Suzanna. The album features India Arie, the Soweto Gospel Choir, Sho Madjozi and Black Motion. One of their songs Disco Matanga is featured in the Queen Sono soundtrack.

NO TIME TO GIVE UP, DR MASHABA HAS A WORD FOR YOU!

Gospel Queen, Dr Winnie Mashaba (not related to scammer Kenneth Mashaba) is back with a stunning single Ga A Fele Maatla featuring Mapule and it is what the world needs right now. Don’t we need a big hug, a group hug, she came through with one! The singer’s moving vocals drive the quintessential song of praise, encouraging a faithfulness to the Lord. Over traditionally arranged instrumentation replete with organic keys and a riveting bassline, Winnie delivers a memorable vocal performance complemented by worship-inducing backing vocals. With its undeniable aura, “Ga A Fele Maatla” is both testament to Dr Mashaba’s enduring career and God’s omnipotence

IF YOU MISSED THE INTERNATIONAL TRAIN, HERE’S A LOCAL!

There’s nothing wrong with grooving and groove is embedded in the very DNA of each South African! DJ Big Sky of the smash hit Fire has blessed with another banger titled Khushukhushu featuring Sbhanga and Gaba Cannal. The Soweto party-starter sampled Bra Hugh’s Stimela into an impressive Amapiano beat and we love it!

DE MTHUDA HAS A STORY TO TELL & YOU WANNA HEAR IT!

In 2020 you cannot have a nice time without a bit of Amapiano to spice things up and why not hear out De Mthuda’s new offering while you at it. You already trust him with the jams, Shesha Geza is testament of his excellent work. Story To Tell Volume 1 sees De Mthuda craft infectious rhythms while skillfully expanding his sonic horizons. Showing his diverse range across eight tracks, he meshes various styles into an engaging EP. A largely vocal take on AmaPiano, StoryTo Tell carries a nostalgic feel with elements of Kwaito threaded throughout the project–most notably on “Sgubhu”.”Amancamnceh”! You deserve nice things and this is one of them!

MAYO IS MAKING A DIFFERENCE!

Mayo MuziQ has stepped up and delivered a beautiful song for Covid-19 frontline workers titled Make A Difference. “There aren’t enough words to adequately describe the immense sense of gratitude I feel for all the essential workers and incredibly thankful for the sacrifice they and their families are making to keep us all safe” comment Mayo. With a combination of Afro-beat instrumentation the song allows the listener to really vibe with Mayo’s powerful voice and inspiring lyrics. This song was written to inspire a message of hope for all in this pandemic.
Picture: Universal Group
By Buzz Life NewsJune 4, 2020UncategorizedLeave a Comment on 7 new Mzansi Music releases