AKA gushing over new Bae 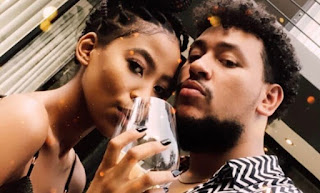 Rapper Kiernan “AKA” Forbes, 32, is tired of hiding his new relationship.
The Energy rapper took to social media to show off his new girlfriend Neli Tembe in a picture captioned “Prime of Your Life”.
After almost a decade of dating famous women, the AKA has settled down with someone, not on the spotlight of fame.
A few weeks ago, AKA released three songs, Energy, Monuments, and Cross My Heartwhich is suspected to be an ode to his 21-year-old squeeze, Neli.
AKA is no stranger to romantic song gestures.
Last year he released the track F.R.E.Ewhere he mentioned his ex DJ Zinhle Jiyane (36) in the song with the lyrics, “Kalawa Phakati, DJ Zinhle… on top of the charts, nobody gon’ shake my confidence. I look you straight up and down.”
A few years ago he dedicated his song The World Is Yours to ex Bonang Matheba (32) who also starred in the video.

PRIME OF YOUR LIFE. 🖤 📸 by @welcometoromesa 🇿🇦 #RichardMille #Priceless 💳