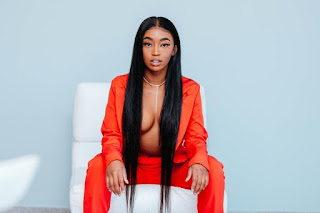 She is known for setting dance floors on fire with her dance moves, adding flavours to the Amapiano songs she has featured on.
Had it not been for lockdown, Kamo Mphela, 21, would be abroad doing what she does best, shaking up a crowd. She was booked for three international gigs in Dubai, the Netherlands and the United Kingdom which had to be cancelled due to COVID-19.
But nothing will kill her spirit or get her down.
She currently has a YouTube channel called Kamo which she uses to connect with her fans daily.
“It’s important to stay relevant and I keep my fans entertained on my channel daily, she tells Buzz Life.
She is currently signed to Major League Music Group which is owned by The Major League DJs  Bandile and Banele Mbere.
“The brothers teaching me how the music business works in case later I would want to open my recording label.”
However she plans of venturing in fashion and property business in the future.
“It is very important to have multiple income streams to avoid being exposed as a dead broke artist later when one is no longer relevant in the music industry,” she says.
Born in Soweto Emdeni, Kamo has always been exposed to music because her father worked at YFM.
“My father used to work at YFM and he was involved the productions side of things so growing up I listened to YFM, and with music comes dancing. I can’t even remember how old I was when I started dancing,” she says.
She would attend events and be the centre of attention and naturally she progressed to emceeing the events.
“I was in grade 11 I started emceeing at events and that’s when I knew I wanted to study media after completing my Grade 12,” she says.
Kamo is currently at Boston Media doing Media Studies. She is also working on her Ep due for release shortly after lockdown.
We can’t wait to see more from Kamo.