Kuli Roberts to cause a stir on The Queen 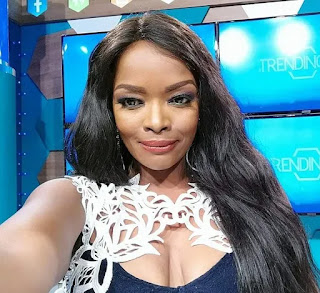 TV and radio personality Kuli Roberts is set to bring the drama to the cast of Mzansi Magic series, The Queen. The sassy Kuli stars as the fashionable 41-year-old cougar Mildred Sefatsa. The trendy Instagram queen is married to Bra Socks, a BEE fat cat in his 60s who dotes on her and spoils her with everything she fancies. But Mildred cheats on him with a younger squeeze.
The lusty mother of one is not shy to get in the ring with her 25-year-old daughter Warona, for the attention of the best guy in the room. While most mothers would cringe if their daughter’s boyfriend hit on them, Mildred jumps at the opportunity.
As a housewife, socialite and good-doer, Mildred is in Johannesburg for a charity project and viewers meet her at a dinner party where she takes an instant liking to one of The Queen’s bachelors and she wastes no time to pounce. What will the young man do when he sees Warona? Will he trade mother over daughter? This is not going to end well…
Roberts who is an author and was last seen in a telenovela some five years ago says: “This is such a meaty role that I couldn’t resist. I’ve always loved The Queen and what they do, so joining them is a career highlight. The role of Mildred oozes with so many possibilities that I cannot wait to explore. I thrive on challenges and this is one I look forward to the most, especially after years away from acting.”
Connie Ferguson of Ferguson Films and The Queen executive producer comments:
“We pride ourselves with quality storylines and the most talented cast at The Queen. We are a team of hard working creatives and we are thrilled to have Kuli in our midst. We look forward to her breathing life into Mildred Sefatsa, I know she will delight audiences and keep them entertained.”
“Kuli is an entertainer who is always willing to push boundaries. We can’t wait to see her in this role!” adds co-executive producer Shona Ferguson.

2020-05-08
Previous Post: Mahlasedi Foundation steps in the gap of Lockdown hunger
Next Post: Letoya back on screen