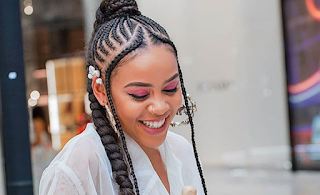 Madjozi whose real name is M8aya Wegerif grew up travelling the African continent with her father who worked for NGOs in countries like Tanzania, Senegal and beyond. This continent-wide upbringing has inspired her Pan African creative outlook and sound.

First, launching herself as Maya The Poet, Madjozi started out ghost-writing lyrics for other rappers. It was Okmalumkoolkat who encouraged her to rap herself and featured her on his hit single “Gqi”.

These days Madjozi is a headline act at high-level gigs across the continent and intentionally. Her recent performance at The Global Citizen Festival alongside international superstars like Chris Martin, Pharrell Williams, Ed Sheeran, as well as Beyonce and Jay-Z, confirmed her rising star.

Speaking about her selection as Apple Music’s first New Artist Spotlight for 2019 Sho Madjozi said: “Wow what a time to be young, African and living in the time of Gqom! I’m so excited that the Apple Music team is as excited for this movement as we are. It’s an honor to be in their new artist spotlight. I’m so happy I could cry.”

The Apple Music New Artist Spotlight is an artist development feature where a light is shone on a new South African artist each month, giving them four weeks of editorial support across the Apple Music ecosystem as a Hero artist, inclusion in the Mzansi Hits Room and key Apple Music playlists such as The A-List: South Africa, Best of the Week, Gqom Nation and more.

With over 50 million songs, Apple Music offers a free 3-month trial with no commitment and is ad-free. Apple Music is available on iPhone and iPad and also for download from Google Play for Android devices.