Mshoza battles to come to terms with mothers death 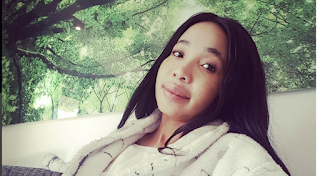 Mshoza’s mom dies after a long fight
Kwaito singer Nomasonto “Mshoza” Mswangayi’s mother had been in hospital for over 4 months on life support after she collapsed in her Soweto home.
On Tuesday 20 June 2017 Mshoza’s mom Gloria Maswanganyi Mafuma died in the early hours of the morning from an unknown illness.
Mshoza’s manager Thanduxolo Jingela  says Mshoza has not taken the news well and she has asked to be given privacy. “Last night we took Mshoza to hospital because she is not taking the news well. She is grieving and also trying to recover from a fever. We ask that she be given time to grieve,” he says.
The Funeral will be on Saturday 24 June 2017 at Protea North, FMC, Mdlalose Street from 7am.
Picture: Mshozabhoza1/Instagra
2017-06-22
Previous Post: PICS: Travis Scott & Bryson Tiller SA Concert
Next Post: All Eyez on Me: Review and Trailer