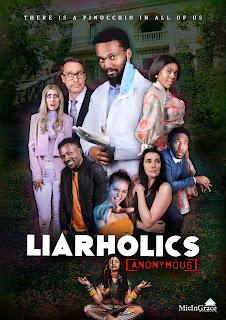 After a three-month break due to Covid-19, MiclnGrace Studios is back at work for its action-comedy, Liarholics Anonymous

.
The star-studded action-comedy that will be starred by The River actor, Yonda Thomas, will also feature a stellar cast including stars like 7 de Laan’s Keabetswe “KB” Motsilanyane, Jo-Anne Reyneke, Craig Urbani, Danielle Steynvaardt, Monica Muller, Germi Pretorius, Kagiso Latane, Lindiwe Mhlari and Mascha van Vuuren.
Set in Sandhurst, a plush suburb in Sandton; according to MiclnGrace Studios producer, Grace Norman, Liarholics Anonymous highlights the modern-day fluid landscape of sexuality and promiscuity.
“It is an intensely intimate action comedy tangled with emotions, lies and the heartbreaks that come with,” she says.
She adds that shooting a film during the Covid-19 pandemic will not be easy but says they have plans in place to ensure that safety will be top priority for the cast and crew.
“We started conversations about safety procedures weeks before opening to ensure that team members were ready to operate under strict safety measures while complying with government safety protocols and regulations to meet the challenges of the COVID-19. There are a lot of changes to our day-to-day operations of the studio and film production, but this will not have major impacts on our production values and the quality of the work we will produced on set.”
To ensure optimum safety for the crew and actors they came up with creative ways of  “achieving the storytelling fundamentals using technology and special effects’’.
“We will be strict on observing social distancing and ensuring strict controlled environments for shooting including wearing of masks, keeping to strict hygienic measures, having twice-daily temperature checks, practicing social distancing off-camera, having on-site medics, and doing regular disinfecting of equipment. We will also ensure that there are no more than 50 people a day in any area,” says Grace.
The series is co-written by award-winning director, Michael ‘Micl Snr’ Norman and Ferdinand W Gernandt, a writer at MiclnGrace Studios. Micl Snr says he is excited and looking forward to working with a star-studded and talented cast.
“We’ve assembled a huge array of great talent. I am beyond excited to work with this amazing ensemble,” he says.
By Buzz Life NewsJuly 7, 2020TrendingLeave a Comment on It’s Lights, Camera and Action as MiclnGrace Studios returns to set