Khanyi Mbau on dealing with ‘daddy issues’ and accepting her depression 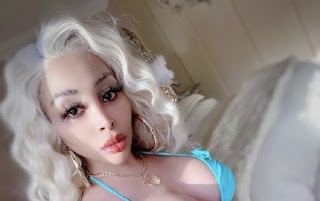 She came to the limelight in the early 2000s and branded herself as a “gold digger.” But after many years of hard work, she has been able to establish herself as an actress, TV and radio presenter and a businesswoman owning her own Gin line I Am Khanyi – Millenial Shimmer Gin.

Khanyi Mbau, 34, has been in the entertainment industry for more than a decade.

Back then, she dated and married former mogul and businessman Mandla Mthembu who she has not seen since her 13-year-old daughter Khanukani since she was eight months old.

In an interview Macgyver “MacG” Mukwevho on YouTube show Podcast and Chill, Khanyi opens up about the reasons behind her attraction to older men and finally excepting that she has been depressed for over 15 years.

She tells MacG that before she met Mandla; she had already been attracted to older men and this goes back to her strict father and the high expectations.

“I was the girl dating the older guy, the head boy. I always aimed for power,” she says.

“This comes from my family; my dad is a very strict Zulu man, he is unimpressed by anything. He always taught us to aim for the best or don’t come home, until today,” she adds.

“It created a complex of not being good enough. My siblings and I are so broken because of this.”

When she met Mandla; she says he gave her the validation she did not receive at home.

“Mandla was impressed by everything I did. He knew every interview I had done. He put aside his life to make time for me,” she says.

“And I saw him as a hero. I worshipped him.”

But Khanyi says their relationship was based on material possessions.

“We’d always talk about fashion cars, parties. It was never a proper conversation.”

And when she fell pregnant she needed an emotional connection.

“I was needy and he had no time. He wanted to impress me all the time,” she adds.

And their relationship crumbled when Mandla started becoming abusive.

“He would beat me, kick me black and blue and he would lock me in the house until I healed,” she says.

On the side, Mandla was also investing in Ponzi schemes that took a lot of money from him.

“He started drinking a lot, wilding out. He threw me down the stairs and I got into labour. That’s how I gave birth. So I had to leave him because he became psychotic,” she says.

After many years of not seeing each other, Khanyi says she tried to contact Mandla to help him get his life together for their child, but his not been able to trace him.

Khanyi says she started therapy a few years ago and was diagnosed with clinical depression.

“I’ve been depressed for 15 years. I’m still dealing with it,” she says.

“I only found out two years ago. Last year it only dawned on me that I’m a mother. I’ve hurt a lot of people because I wasn’t there for them. I was cold and I lost a lot of people in my life,” he says.

“We were told to see a GP and a dentist but we still don’t under a psychologist. Even If you don’t feel anything wrong with you, you need to go sit with someone,” he advises.

She is currently working on bringing together a pool of psychologists to help those in need.

“Therapy is like the gym; it first needs to become like a lifestyle and a year of going those seeds will start blossoming,” she adds.