Prophet Bushiri and wife speak up on postponed trial: ‘This is unfair’ 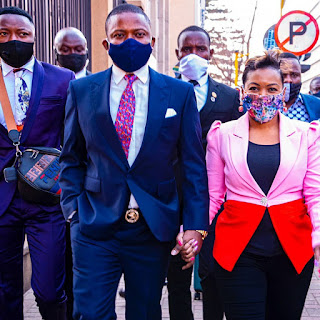 On 27 July, Prophet Shepard Bushiri and his wife Mary Bushiri appeared at the Pretoria High Court for charges of Money laundering, fraud, and contravention of the Prevention of Organised Crime Act.

The North Gauteng regional spokesperson for the director of public prosecutions Lumka Mahanjana said the matter had been postponed to 16 October 2020.
Prophet Shepard Bushiri took to social media to speak on the postponement.
“My wife and I appeared at the Pretoria High Court for a trial which was postponed on the 29th of November 2019,” he wrote.
“During our appearance, the prosecutors applied for the court to postpone the trial till next year July, because their 29 witnesses refused to come to court because of Covid-19,” he said. “My wife and I, together with our lawyers, took the risk in spite of Covid-19 and attended court. How is Covid-19 dangerous to the witnesses and not for my wife and I? I ask… I instructed our lawyers to vehemently oppose the postponement to next year, as we have been on remand for over a year already. Our lawyers indeed gave a detailed history and opposed the postponement,” he said.
“You will remember that at the time of our arrest, the state claimed they had evidence and wanted to go to trial. However, at each appearance, they have asked for more time.”
Shepard Bushiri says he is “disappointed that the Judge has granted a postponement for the State to get their house in order.”
“The President of South Africa has announced that we should learn to live with Covid-19 in our lives. Therefore this trial should have proceeded because it was booked for the whole month of August. I feel this is unfair, seeing my lawyers were ready to proceed with the trial,” he wrote.
“We have faith in the justice system of this nation; we do believe that we will get justice one day and we will be able to live our lives freely. We remain ready for the trial in order to clear our names. We are very grateful for your prayers and support. When I saw all those multitudes, I became so emotional, more especially after I had announced that none must come over at the court but follow the proceedings from home.”
Pictures: Prophet Shepard Bushiri/Facebook
2020-07-28
Previous Post: Zawadi YaMungu’s debut album a re-birth of music sung in the 60’s
Next Post: Berita and Nota Baloyi engaged