Skip to content
By: Buzz Life News
With: 0 Comments 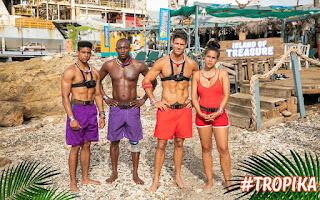 After a nail-biting season,  #TeamCoolRed (Nadia Jaftha and Trevor Lagerway) and #TeamMangoPeach (Siphesihle Vazi and Darren Solomon) will continue to battle it out in the Tropika Island of Treasure Curaçao grand finale in the hopes of getting their hands on the shared R1 million grand prize.Part one of the finale kicked off in style earlier this week in the series’ biggest challenge to date. Team Cool Red had an early advantage as the long-life charms they acquired throughout the season gave them a staggering one and a half minute head-start. Meanwhile, Team Mango Peach encountered a few bumps along their road after sinking their boat on the first challenge. However, their never-give-up approach to the game saw them recover quickly and managed to catch up with Team Cool Red in the series’ most difficult puzzle round to date.With the remainder of the finale to be screened this Tuesday 2 June 2020 at 19h30 on SABC3, it’s clear that it is still anybody’s game. Now, Nadia Jaftha and Siphesihle Vazi open up about their experience on the show as the race to the finish continues.“Being in the final is so exciting,” Vazi says.
“It’s something Darren and I have been working towards as Team Mango Peach this entire season and it’s great seeing all our hard work paying off in this moment.”
Vazi adds that he is confident in his ability to take home the crown together with his incredible team mate Darren Solomon. “
Darren is physically capable of competing in every challenge. He is a strong swimmer and runner so I can count on him should we have challenges that require that skill set. We know each other’s strengths and weakness; we’re stronger as a team and that bond will give us that extra edge.”Meanwhile, Nadia Jaftha adds that this season of Tropika Island of Treasure has been a defining moment in her career. “Tropika Island of Treasure has taught me that I should never underestimate myself – and I don’t plan on doing that in the finale,” she says.
“In the beginning of the season, I kept on doubting myself because I wasn’t the strongest, fittest or the best with puzzles. But as the season progressed I have a lot more confidence; I speak up a bit more; I ace challenges and it was even more of a reminder that I am able to do whatever I set my mind to.”
She adds that being partnered up with Trevor Lagerway was a strategic move which she hopes can help Team Cool Red clinch the shared R1 million grand prize.
“I knew Trevor was the perfect partner when I found out that he was a competitive obstacle course athlete. The second I found that out, I knew I wanted him to be my partner. From there I sold myself to him and he believed in me enough as a potential team mate, which was great,” Nadia adds.
“We have all the strengths that make a solid team and we will give nothing but our all during the finale.”Tune in to the Tropika Island of Treasure Curaçao finale this Tuesday 2 June 2020 at 19h30 on SABC3 with the repeat on Saturday 6 June 2020 at 20h00.
2020-05-28
Previous Post: Nataniël’s Oven-Toasted Baguette With Smoked Salmon And Apple
Next Post: US comedian B. Simone on making her first million in under 30 days using her talents